The Samsung Galaxy S4 is certainly one of the best innovations to have ever come out of Samsung’s doors. But even though the phone’s original battery offers a pretty impressive life, things can go a little down south after several months of usage.

This is where being familiar with the best replacement battery for Galaxy S4 means a lot especially if you want to keep your lovely phone for longer. Talking about replacement batteries, let’s get a little practical and talk about what options are available at your disposal.

RavPower have been struggling to build a good name for themselves in the replacement batteries’ industry. Their Galaxy S4 is one of their best shots on target so far. The grade A cells promise to deliver up to 500 cycles which means you can use it for more than 24 months without ever thinking of dumping it. We believe that these are reasonable timelines.

What we really like about this battery is its protection. Though it may look like any other simple battery out there, it has built-in features that prevent overcharging or overheating.

Unlike other replacement batteries, this one comes with NFC capability, which makes it possible for your smartphone to communicate wirelessly with others and even make e-transactions. Being a Li-ion battery only confirms the level of integrity bestowed to this unit.

The only gripe we could pick with this battery is that it does not offer optimal results at the first cycle of usage. The manufacturer recommends up to 5 charge and discharge cycles for best performance.

There are a dozen reasons to fall in love with this PowerBear. For starters, in addition to the 6000mAh battery, you also receive a free backcover and protective casing for your phone. If you are anything like me, I love freebies; then this option could resonate with your expectations. But beyond the side-shows, the battery itself offers what qualifies to be above-average capacity.

The manufacturer claims that it delivers 230 percent capacity than your standard battery. We are yet to understand the true meaning of 230 percent as so far the battery only seems to offer same results to a brand new Samsung Battery. So let’s just say it offers 100 percent charging capacity, not 230 percent.

What does it mean to have 100 percent charging capacity for Samsung S4? Well, it means you can surf for more than 12 hours (non-stop). Likewise, it means you can enjoy extended talk-time and even more hours to listen to your awesome MP3 files.

While this phone is made in Japan, the actual assembling takes place in China. That, however, is not a big deal since even Apple does something close to that (design takes place in the USA but assembly in China). Moving forward, this Samsung battery uses advanced Li-ion technology to maximize recharge life. What’s more, the unit is rechargeable with no memory effect. Being a genuine battery from SAMSUNG themselves goes a long way to confirm the quality invested in this product.

The battery is CE certified. Besides that, it offers Near Field Communication (NFC) which means it helps you take full advantage of modern technology to communicate with other devices around you.

The 3.8-volt battery promises to at least keep your phone fully charged for more than 24 hours. Of course, that may not sound like anything near stellar but it surely does play a role in bringing an S4 back to life. As you would expect of any genuine Samsung product, this comes well packaged and ready to use. So you simply unbox it, and you are good to go.

You may also like to check out another article of ours, that we’ve already reviewed the Best Replacement Battery for Galaxy S5

This battery is specifically made with your S4 Mini in mind. Powered by 3.8 volts worth of Li-ion magic, the 1900mAh battery offers enhanced 4-pin compatibility with this unique breed of S4s. Weighing in at 18 grams, this battery is neither too light nor too heavy for everyday use. Everything about it screams high quality, plus it comes in non-retail packaging which is a pretty good thing. The Lithium-ion battery is relatively easy to install, the only precaution you need to take is that this requires being fully-recharged before first-time use.

In our opinion, the phone works well for the first 12 months of replacement. However, its performance generally dips by about 20 percent in the second year of usage. That, of course, means you can tap into this as a backup battery to keep you going.

Built upon advanced Lithium-Ion battery technology, this is yet another unit from Samsung that promises to revolutionize your S4. Or should we just call It the best replacement battery for Galaxy S4? Well, the jury is still out on that. The 1900mAh battery allows one to store just enough power to keep them going throughout the day. You can actually use it for more than 24 hours if you disconnect your internet and stick to calls only.

But that’s not what Smartphones are about. So we think something needs to be done – the world badly needs a battery that can last beyond 24 hours when one is surfing the internet.

So as far as that is concerned, we can say that although this battery is good enough to keep you moving, there is really nothing magical about it. 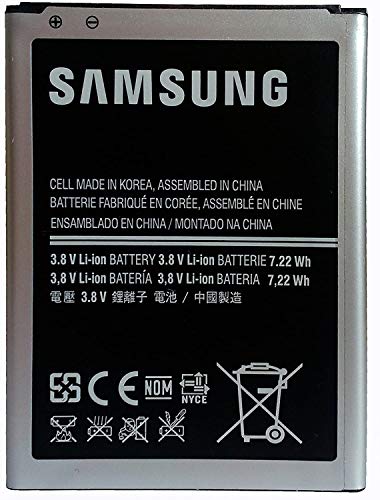 On 27-th of April 2013, Samsung released one of their most awaited phone models, the Samsung Galaxy S4. Right off the bat, this smartphone promised nothing short of perfection. It packed a number of unique features among them:

Temperature and humidity sensors among others.

Its enhanced capacity, however, places a great strain on its 2600 mAh Li-ion battery. And no matter your phone usage and recharge habits, you’re likely to find yourself needing to make a replacement. Without a good replacement, your device would be virtually useless.

But even then, choosing a poorly built replacement Samsung S4 battery is never a solution. In that regard, we highly recommend sticking to the following important guidelines.

NFC is an acronym for Near Field Communication, a technology that enables devices within a short range to communicate wirelessly. Likewise, the technology comes in handy when one needs to share files, contacts or even engage in e-transactions.

The Samsung S4 was built with these particular needs in mind. And to help ensure that you retain these benefits, you want to make sure that the battery you settle for provides NFC capability.

The good thing with NFC is that it typically consumes less power than Bluetooth and WiFi which makes it an important piece of technology not to be missed.

This is an extremely important factor consider when buying a battery. Different batteries are suited for different S4 models. And for that reason, you want to have the details of your device at your fingertips so you can make an informed bet.

For instance, there are three common models of the S4 namely the GT-I9500, GT-I9505, SCH-I54G, SGH-M919 and so forth. So if you’re not sure about the specific phone model, we’d encourage you to search “How to identify a Samsung phone model” before you make a purchase.

It doesn’t make sense to replace one weak battery for another. That’s why we strongly advocate for getting the best in terms of power. In particular, we recommend going for something that provides at least 500 charging cycles.

What does the number of charging cycles refer to? Well, there’s a whole load of science behind recharge cycles but what you need to keep in mind is that they determine battery life.

A battery with at least 500 charging cycles will be enough to last you for at least 24 months of average use.

A phone’s battery capacity is measured in the form of milliamp hours (mAh). Basically, the more the mAh a battery has, the longer it’s likely to last under normal use. In that regard, the standard mAh for S4 batteries is 2,600mAh.

To cut to the chase, the best Samsung S4 battery is one that falls anywhere between 2,600mAh and 3,000mAh. That way, you can rest assured of the battery being safe and powerful at the same time.

With so many batteries on the market, it would seem like the market is unregulated. That, however, isn’t the case. If you’re in the market for a legitimate battery, then it should at least be certified.

Certification ensures that your battery is safe for use and that it has the appropriate chips needed to prevent overcharging and overheating. Some of the most common certifications to expect include:

This is a European standardization mark meaning that the product meats the harmonized EU requirements. T also indicates that the battery has passed a combination of tests, especially regarding electrical safety testing.

This is an important compliance standard which ensures that the battery you get does not contain hazardous substances.

So, no matter how badly you need a replacement battery, don’t go for one that doesn’t have those two certifications.

What happens when you leave your battery on the charger for too long? Ordinarily, the battery would overcharge, overheat and even burst into flames. But to be honest, that’s the last thing you want to happen in your home.

That’s why it’s important to double check if the manufacturer has installed the appropriate microchips in their battery. Ultimately, that would help add to your safety and also ensure that the battery (and phone) last long.

Only manufacturers who are confident in their products provide a warranty cover. Therefore, if you can find a battery that enjoys an extended warranty period that would certainly be a good thing. You don’t want to end up with a faulty battery even after investing your hard-earned money for it.

Must my replacement battery from Samsung?

No. The replacement battery’s market is an open one and this has created room for other players to get on board. So, you can always find better batteries than the OEM batteries if you look closer.

How can I tell that a Samsung S4 battery is good by just looking at it?

A genuine replacement battery should be good looking and generally well-sealed. Most importantly, it should contain the necessary certifications e.g. CE, CCC, and RoHS clearly inscribed on them. Apart from that, a good battery is one that comes with a user manual written in at least 3 languages.

How do I ensure that my replacement battery lasts long?

There’s no foolproof way to keep a battery operating for long and that’s because all devices are subject to wear and tear. That said, you can take proactive steps such as limiting usage, reducing screen brightness and reducing the video content viewed with it. Also, avoid recharging unnecessarily. Wait until the phone prompts you to do so, if possible.

I have just bought a new replacement battery but it isn’t recharging fully or holding power as long as expected, what should I do?

Most genuine battery replacement manufacturers recommend using the battery for up to 5 charging cycles. Eventually, most batteries stabilize with time. But if you’ve adhered to this guideline and the battery still isn’t working, be sure to follow up with your supplier for a possible replacement. Note: Replacements are usually done as per warranty terms.

After all, there is life for your S4 long after the original battery it came with dies. That’s good news to anybody who wants to make full use of their phone without having to stand next to a power socket all the time. However, as we have seen, the quest for the best replacement battery for Galaxy S4 keeps getting better with the introduction of new, advanced technologies into the market.